There is an undeniable romanticism tethered to the idea of living “off the grid”. Such a way of life seems natural, normal, and — though it is never mistaken for an easy life — all the hard labour is considered “honest”.

Off-grid living in a motorhome then seems even more romantic. Whereas living off-grid implies a certain rootedness to a particular plot of earth, motorhome off-grid living instills an even greater sense of independence and freedom because it no longer restricts to any one place, for any long period of time.

But is the off-grid lifestyle really possible in a motorhome? That depends on what your definition of “off-grid” actually is.

There is some debate over what really “counts” as off-grid living, but the most popular one seems to be: a general way of life independent of major public utilities such as electricity and water.

Hard-core definitions include avoiding all public infrastructure entirely, and at the opposite end of the spectrum we have people who live a sort-of nomad lifestyle, who are more engaged in full-time touring than anything else.

The hard-core definition is not compatible with motorhome living — mainly because public infrastructure includes roads. But while the softest definition of an off-grid lifestyle is certainly possible, the more orthodox view of off-grid living, a lifestyle independent of grid water and electricity, is not without its challenges. 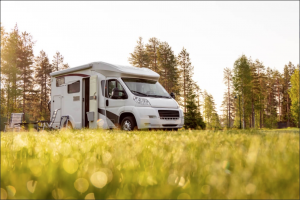 The off-grid and motorhome combination is often associated with freedom

Off-grid motorhome living — what you can realistically do

Living full-time in a motorhome will inevitably make you dependent on the road network. There are advantages and disadvantages to this. One advantage is that, obviously, roads make it possible to travel almost anywhere pretty easily. But a life on the road is also one subject to government laws, rules and taxes — which will all dampen romanticism.

Life permanently on the road can be as tiring as it is exciting, and from time to time a break might be welcome. Especially if there is enough time to grow some food or source water. But it is not possible to just park your motorhome up by the side of the road, even in the middle of nowhere. In the United States, the authorities will demand a building or construction permit after a while; and in Britain planning permission must be produced after 28-days.

Here are some things you can do if you want to settle down for a brief period:

And that is pretty much it. A fourth option — the most romantic one — of living permanently nomadic, with no fixed address, would come with enormous complications. Mainly from insurance companies and government red tape, of which both will not be keen on covering anything without some form of semi-permanent address.

As mentioned above, there is the option to go full-time touring. This is not an off-grid lifestyle, but I mention it here because when a lot of people dream romantically of living off-grid in a motorhome, what they really mean is they would like to have a free and independent life.

Full-time touring is the easiest, and probably the most desirable, way of motorhome living for most people. Even if it isn’t the most noble. Because it has all of the upsides and none of the downsides of off-grid living.

Someone who is full-time touring would have no hesitant thoughts about going to the supermarket for food; or signing up for a 24-hour gym just to get a hot shower at night. And they most certainly wouldn’t lose a night’s sleep over hooking up to the grid as the going gets tough in the depths of winter. But full-time tourists have advantages over other motorhome enthusiasts, as they will be more battle-hardened. For example, full-time tourists are more likely to settle on holiday sites with no power grid access. Such sites are usually very cheap and almost always empty, even on public holidays and in the midst of summer. And it is here that full-time tourists will often have a try at true off-grid living and self-sufficiency.

Sourcing power in a motorhome

Thanks to modern technological developments, achieving energy self-sufficiency is actually the easiest part of the off-grid lifestyle. Aside from fuel required to get around, there are four key components that, combined, should be more than enough to power your energy needs, and especially when settled down. They are:

Sourcing energy is not too difficult, but can get expensive over time. But if you can afford it, energy sufficiency shouldn’t be a problem. 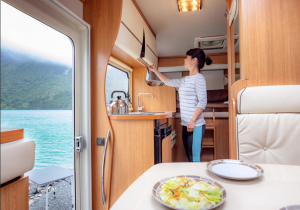 Sourcing water in a motorhome

By far the most difficult part of off-grid living — motorhome or not —  is sourcing water. Even the most die-hard off-grid enthusiasts sometimes have to source their water from public utilities. On the road, without a permanent settled residence, it becomes even harder.

This is because most rivers and lakes are either polluted (by both chemicals and animal faeces) or home to microorganisms that, if ingested, can cause serious illness.

Digging a well is out of the question. Even in an area with a high-water table, sourcing water is no guarantee. Well-digging also obviously requires digging equipment, and an abnormally high-pressure pump to extract and deliver the water. It can cost thousands to dig a well, and you will almost certainly need some permission, or face reproach from the local authorities.

Sourcing food in a motorhome

So, for the water part, the answer is almost: definitely not. But for food self-sufficiency, the answer is: sometimes. It is possible to grow a surprisingly large yield of fruit and vegetables in a small area with careful management. Raised beds of about 24-inches wide should serve a couple of people well. And the fruits of the raised bed can be supplemented with more edible fruits grown in containers.

The big problem here is, in order to be food sufficient in this way, the motorhome will have to stay put for months at a time. There is a trade-off between food sufficiency, and your independence.

Growing food like this also requires a de facto vegan diet, and the meticulousness of an amateur biologist. Mother Nature will send pests, diseases, and bad weather — all of which will erode at the fruits of your labour. There is also a reality check to be had here. There are plenty of romantic notions around growing one’s own food, but many who have tried it have complained bitterly of stomach problems and developing bad breath. For most people, it is far more satisfactory to grow some food, often in planters, and the motorhome doesn’t have to be grounded in one place.

To answer the question posed in the title of this article, the answer is: it depends. Mainly, it depends on what you interpret “off-grid” living to actually mean. It is certainly possible to source power independently of the grid. This is actually pretty easy and mostly straightforward.

But with sourcing clean drinking water, and being food-sufficient, things are far from straightforward. At best, you might be able to obtain food and water self-sufficiency some of the time. Though it will not be easy, it will be good honest labour. And in those intermittent periods, where one can truly live independently off the Earth, there are fewer greater senses of accomplishment.

Neil Wright is a writer and researcher. He has an interest in travel, science and the natural world, and has written extensively about living off the grid and self-sufficient living on his website.