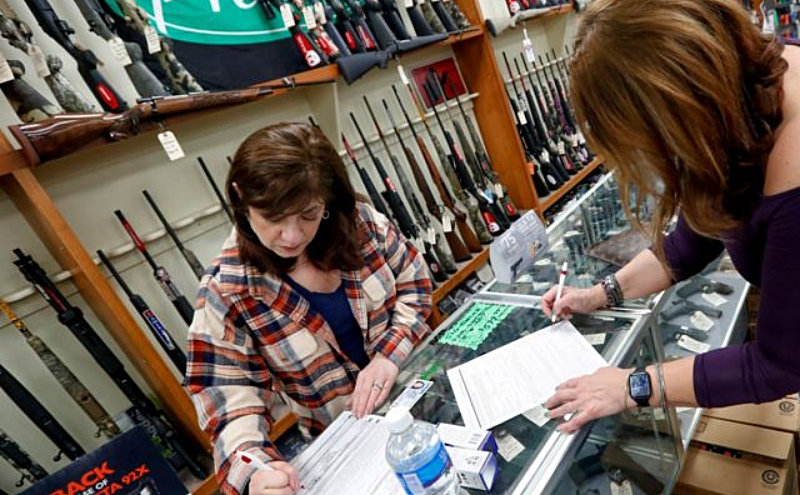 Folks, something’s going on. Big time. Americans know that something’s not right. More so than ever before. Hows’ that? Well, here’s some evidence…

April’s surge in background checks followed a March that shattered ALL ONE-MONTH RECORDS. Breitbart News reported March 2020 witnessed 3,740,688 background checks, which were the most checks conducted in any single month since the inception of NICS.

What does this tell us?

That people are concerned about their security in record numbers as we enter unprecedented times. People are evidently having “trust issues”. Who could blame them?

Is it just the Wuhan virus? Or is there more going on here…

Buckle up… This National Emergency was just the test case to see how the public reacts. People were willing to give up their rights for what? Cloward-Piven strategy is being implemented … 8 weeks the best economy in 50 years was stopped dead in its tracks. Bailouts for anything that moves while they destroy the value of the dollar. Pelosi wants almost a $T to bail out the states who are broke.

Maybe the people buying these guns did so for one or both of the following reasons:

1) They fear civil unrest and lack of law enforcement.
2) They are arming for a revolution in the event that the government doesn’t relax its tyrannical grip on their lives and livelihoods.

It is interesting that just as soon as the world falls into the precipice, people wake up to the fact that their all-knowing, all-protecting, all-everything government can’t even give them a ninety-five cent dust mask, never mind protect them if things get worse, and things certainly are going to get worse. There is nothing like the cold, hard reality of the largest government failure in history to have people seeking the comfort of a warm gun.

Whenever the anti-American Left starts making noise about taking away Constitutional rights, firearms sales hit new records. One would think they would add 2 + 2 and realize they are motivating a group of people that they may regret meeting when the rubber meets the road.

I’ll finish with this from a commenter named “MrWorldCitizen1” which I read on another site this morning:

It’s not about your health.

When the State tells you it’s safe to go to Home Depot to buy a sponge but
dangerous to go and buy a flower, it’s not about your health.

When the State shuts down millions of private businesses but doesn’t lay off
a single government employee, it’s not about your health.

When the State bans dentists because its unsafe, but deems an abortion visit
is safe, it’s not about your health.

When the State prevents you from buying cucumber seeds because it’s
dangerous, but allows personal lottery ticket sales, it’s not about your
health.

When the State tells you it’s dangerous to go golf alone, fish alone or be
in a motor boat alone, but the Governor can get his stage make-up done &
hair done for 5 TV appearances a week, it’s not about your health.

When the state puts you IN a jail cell for walking in a park with your child
because it’s too dangerous but lets criminals OUT of jail cells for their
health – it’s not about your health.

When the state tells you it’s too dangerous to get treated by a doctor for
chiropractic or physical therapy treatments yet deems a liquor store essential
– it’s not about your health.

When the State lets you go to the grocery store or hardware store but is
demanding mail-in voting – it’s not about your health.

WAKE UP PEOPLE… If you think any of this BS is about your health, you’re
a fool!! Please open your eyes & stop being lead like blind sheep.

So what say you? Why are people buying guns in record numbers right now?