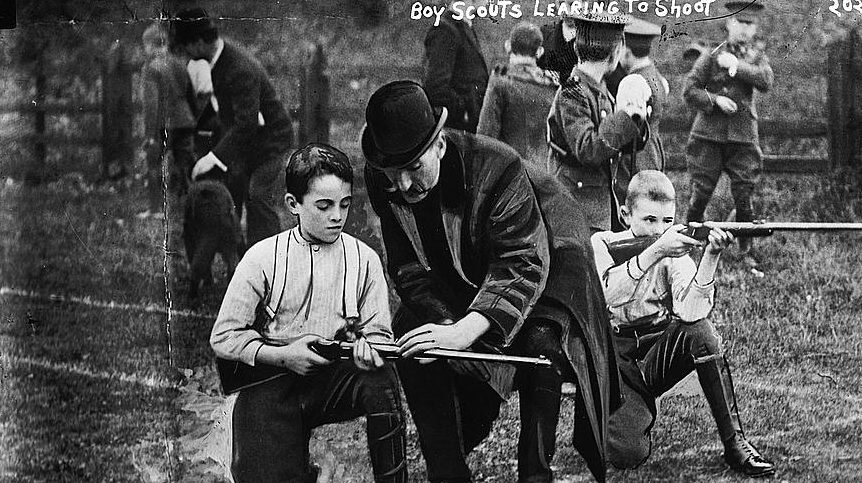 For my rifles, I stocked up on 10-round detachable magazines, stripper clips, and en bloc clips. For those of you still oppressed in Kalifornia, and if you missed the opportunity during “Freedom Week” in March/April 2019 to legally purchase 30-round standard capacity magazines then here is an idea to consider – I purchased magazine parts kits. All they do is remove the floor plate from standard magazines. If bad things happened, I could assemble the kits and load the standard capacity magazines. Based on reliability reviews of various magazine brands, I selected 20 round magazine kits for both the M1A (M14, GI surplus) and Mini-14 (ProMag).

Another idea that might be less expensive than a parts kit is to purchase full capacity magazines and have them shipped to someone you know out of state. On your next visit out-of-state, disassemble the magazines then take the parts home. MagPul 30-round PMAGs go on sale for $8 each with free shipping every once in a while at Palmetto State Armory. (Thank you again, Mr. Rawles, for all of your deal tips in the blog.) I stocked up on PMAGs now that I have escaped Kalifornia.

I purchased ammunition to feed the firearms. I even purchased some additional 9mm and .45 ACP for barter. Each firearm has some type of web gear for the loaded magazines or en bloc clips. Olongapo Outfitters has some great grab-and-go gear as well as side saddles for the M1 Garand, shotgun and magazine-fed platforms. Some Garand cartridge belts are on the wish list. The web gear and magazines/clips for each firearm need to be better organized by firearm for quick access. For the budget conscious, you can purchase surplus World War I grenade carriers, Chinese chest rigs and replica cartridge belts that have appropriate size pockets for your magazines or loaded clips. But it seems that the prices of surplus have risen and are now on par with newly manufactured items.

I attended two Project Appleseed shoots. I learned that my near-sighted eyes do better with optics than with iron sights. At a second Appleseed shoot, I brought my youngest daughter. I also attended training for basic handgun (even though I didn’t own one) and basic and advanced shotgun. I dragged various children with me to the different training sessions. I went to the trap/skeet range and had fun practicing. I need to train more.

Hearing protection is a must when shooting. We have several bulk containers of foam ear plugs. There are several pairs of Howard Leight Impact Sport Earmuffs. These are quite amazing to me. They have built-in microphones/speakers which will allow you to hear conversation yet the circuitry will clamp the volume of a firearm discharge you hear to 75 dBA. You can also turn the volume up and amplify the whispers of someone across the street while maintaining hearing protection. Also stocked are a few pair of SureFire Sonic Defenders filtered earplugs. These work similarly to the electronic earmuffs but are passive (no amplification) and require no batteries. There are some Howard Leight QB2 ear plugs which have a flexible band that holds the ear plugs in your ears and facilitates easy donning and removal; nice at the range.

Safety glasses are also a must when shooting. We have pairs of generic industrial safety glasses. I have been near-sighted since my elementary school days. My normal daily prescription spectacles are Kenmark Wolverine ANSI Z87.1 rated lenses/frames. When I go to the range or a construction job site requiring safety glasses, I just install the removable side shields which came with the glasses. I purchased sunglasses and a spare pair of regular glasses in the same frame for interchangeability/back-up. (One is none and two is one.) I keep the previous set of glasses with the old prescription for additional back-up. Some people hate their glasses; I actually feel naked and unprotected (not to mention blurry vision) when I do not have my glasses on.

Now that I am have exited Kalifornia, I need to get a handgun or two as well as my concealed carry permit. After reading Pat Cascio’s review, a Glock 19X may be on the near horizon. I actually bought some PMAG 27-round 9 mm Glock magazines direct from MagPul when they were on sale for use with a future pistol or for use in a KelTec SUB2000 pistol-caliber carbine.

Closing out this section on self-defense, please allow me to share my opinion on the Second Amendment. The Second Amendment of our Constitution is not about self-defense from criminals. The Second Amendment certainly facilitates that self-defense. Think more along the lines of “the shot heard round the world.” The Second Amendment is for the citizens of the Unites States of America, from whom the consent to be governed originates, to be able defend themselves from tyrannical rulers, including specifically those tyrants who might come to power within our own government. As stated by Abraham Lincoln in his Gettysburg Address, our government is “…of the people, by the people, for the people…” Review the events of April 18 and 19, 1775 when British soldiers moved to seize weapons and ammunition (think gun control) from the uppity American colonists. Mr. Beto O’Rourke (“Hell, yes, we’re going to take your AR-15”) entirely missed the main point of this critical part of American Revolution history. You and I and all the citizens of the USA are the country. The government which we have instituted is not the country.

I try to be budget conscious so I looked for the best value – the most calories for the least money. Some might say that I am obsessive and compulsive. I chose to purchase nitrogen-packed (or these days buckets packed with oxygen absorber packets) bulk food in 6-gallon buckets (“super pails”.) We have wheat, oat groats, corn meal, lentils, three types of beans, flax, quinoa, dried carrots, dried onions, tomato powder and egg powder. We have about 2,000 pounds combined. The rule-of-thumb which I learned from my backpacking days is 1.5 pounds of freeze dried/dehydrated food per person per day.

Our stock of super pails was purchased when all of the children were at home so we now have several years’ worth for just the two of us. We will be able to take care of others with the surplus. My most recent purchases were from www.rainydayfoods.com. Take time to search around for the best prices, including shipping. Shipping can be expensive since the super pails average about 45 pounds each. Making one large purchase rather than many smaller purchases may save you on shipping costs. You can package your own super pails if you have a bulk source of grain close by. You will need food-grade buckets, lids with gaskets, Mylar bags, a heat sealing device, oxygen absorber packets and good grains, etc. to put inside.

Grain mills were purchased for the whole grains: one electric mill (L’Equip Nutrimill) and one hand mill (Back To Basics) for flour, one hand mill for steel cut oats. You can purchase salt and sugar at Costco and fill your own food-grade buckets much more inexpensively than buying a pre-packed super pail. Salt and sugar do not need to be packed with oxygen removers as they will not go bad from exposure to air. You just need to keep the moisture out (and bugs, in the case of the sugar.) I added two buckets of Ark 390 dried food a few years ago. Although I have not done a taste-test, it is what I would categorize as mediocre backpacking food (not as good as freeze dried.) It will be quicker to prepare than the whole grains/beans during a transition to eating stored foods.

Cases of canned goods are kept in the pantry: chicken, tuna, beef, Vienna sausages, Spam, raspberry jam, 4 kinds of beans, vegetables, honey, Karo syrup and pancake syrup. I used to keep a significant amount of peanut butter but found that it tasted “funny.” I expect that it had gone rancid from the rotation cycle being too long so fewer jars of peanut butter are kept now. Olive oil was stored in the chest freezer in the garage in California. The chest freezer did not make the journey to our new home so a larger stock of cooking fats needs to be reestablished.

There are containers of various bulk spices to make the bulk foods a little tastier. After the learning experience with the peanut butter, the expiration date is marked on each case of food and if those items get to within 6 months of expiration they are donated to my church pantry or the local food bank. New goods are purchased to replace any items donated or used in normal living. The honey and syrups will not go bad; no need to rotate. Canned goods will really last significantly past the “use by/best by” date but the high fat foods will go rancid sooner. Canned tomato products are acidic and the cans tend to corrode and leak if stored too long. Storing cooking oils in the freezer if you have room will lengthen their storage life.

For cooking we have an MSR WhisperLite International backpacking stove (uses white gas or unleaded gasoline), a propane stove (screws onto the top of a propane canister), a used Coleman camp stove, a Volcano stove and several EmberLit stoves. For cooking fuel there is white gas, hexamine fuel tablets, and charcoal. There is a Dutch oven which could be used for campfire cooking.

(To be concluded tomorrow, in Part 4.)