It is well-known that some people prioritize their own self-interest over others’ lives. People commit crimes of varying severity every day. When people become more desperate, crimes tend to become more frequent and severe. This is especially true in home invasions, when the invaders are often willing to hurt the occupants to get what they are looking for. This article will describe how to defend your home by utilizing a proactive approach, rather than trying to catch up to the attacker’s intent and capabilities.

Due to the COVID-19 pandemic and the government’s response, there has been mass unemployment around my town. Before my family began quarantining, we went to get some take-out from a local business. The owner made small talk with me while I waited for the food to come out. She and her husband owned three local restaurants, which had employed one hundred and six people. When I asked her how many they had to let go, her face dropped as she said eighty eight of her one hundred and six workers were now unemployed. I have heard similar stories all throughout my town.

This has contributed to the dramatic increase of violence. In my town alone, murders have nearly doubled, home invasions have gone up nearly 50%, and the number of rapes has skyrocketed. After reading these statistics, my family and I refined and rehearsed our home defense plan, and we can defend our home from varying degrees of intrusion and violence, ranging from trespassers to violent attacks. This is very much influenced by my military experience, and I hope this article helps others prepare their families to defend their homes and feel more secure when SHTF.

Before I begin, it is necessary to describe this approach to home security. Most people rely on an almost entirely reactive approach; the intruder chooses the time, you react and hope to repel or kill the intruder. I respectfully disagree; there is so much you can do to anticipate and prepare for intruders, it would be negligent to just sit idly and wait. While the intruder chooses the time, you choose the place. You can prepare the setting to deny avenues of approach for unwanted visitors, while creating covered and concealed positions for you and your family. You can prepare your family with a host of skills that allow them to hide or defend themselves as necessary. Benjamin Franklin once said, “By failing to prepare, you are preparing to fail.”

When defending a home, there are four separate areas to be considered. Please see Figure 1 below for a visual depiction. Area Four is outside your property (green), Area Three is inside the property lines (yellow), Area Two is inside the home (orange), and Area One is the most defendable room (blue). Together in a home defense, they become layers of defense that are much more formidable, and more likely to stay secure, when SHTF. I will explain each area, actions to be taken to secure them, and how to apply this layered defense to rural, suburban, and urban situations. Because many metropolitans, including myself, live in apartments, I will especially apply home defense in urban situations to apartment living. 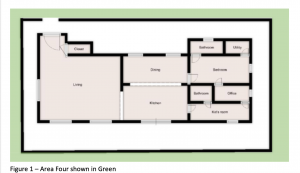 Area Four consists of anywhere outside of your property line. You decide how far to set as Area Four in your defense plan based on the terrain and your ability to monitor and defend the area. In rural areas, I would recommend designating as far as your line of sight is, minimum 100 meters past your property line, as Area Four. In suburban areas, I would recommend your entire neighborhood. In urban areas, I would recommend your block or apartment complex and parking lot. The key to Area Four is surveillance and early warning.
For any intruder to enter your home, he or she would have to first get inside the yard. Many people would ignore anywhere outside of their property, however this area can save you precious time as you anticipate and prepare for intruders. Area Four is the first line of defense, and it must be taken seriously in order to create a well-layered defense.

The goal in this area is to identify potential intruders and any other information about them. I would look for: activity, numbers, clothes they are wearing, weapons or equipment they are carrying, and patterns. Some questions you may want to ask yourself include: What are they doing? How many people are there? Are they wearing any clothing that identifies them? What weapons or equipment do they have? Do they have firearms? Do they have breaching equipment? If they have binoculars and are reconnoitering your area, you will definitely want to find out why and if you are at risk.

Identifying this information as early as possible is crucial, as it will allow you to prepare for any potential threats and immediately take action. It is essentially an early warning system. While others wait for potential intruders to get inside their property before taking action, this philosophy requires you to take initiative and find information as soon as possible. I must caution, however, against becoming paranoid or over-investing time or energy in this. Especially in an urban environment, there are so many people that are walking around that you can easily exhaust yourself. This is entirely dependent on the situation. If you are relatively secure in your area and your street is operating as it normally is, then you should only use sound as your monitoring system. For instance, hearing screaming or gunshots would be an indicator to activate your defense. However, when the SHTF and there are marauders roaming your streets, then you must use all your capabilities to monitor Area Four, including: line of sight, drones, and patrols. The rest of this section assumes that you are in a situation in which SHTF.

Line of sight allows you to stay in a protected place in your home and observe activity in Area Four safely. It is a great activity for a sentry. Depending on the terrain, it can be very effective or completely useless. The more open the terrain, the better for line of sight observation. Obviously this will be almost entirely ineffective in an apartment.

Drones are another way to gather intelligence to cover Area Four. While we cannot always rely on technology being available, or even still working, in TEOTWAWKI, we should prepare to use technology if possible. Drones are great for surveillance because they do not require you to expose yourself. They can go higher – and thus get a better view of Area Four – and identify key information before you need to ever expose yourself. This works great in all terrain, as it can cover an entire apartment complex or vast, open terrain very quickly and effectively.

However, neither line of sight observation nor drones are as important as patrols. While it is risky to leave your property, you must patrol Area Four often and at unpredictable times. This allows you to make contact with your neighbors or other people who are in the area, identify potential avenues of approach for intruders, and identify dead space in and around Area Four. If you do not patrol often, you run the risk of being attacked by prepared forces that can easily overrun your home.

If you have enough people to guard your home, you must patrol Area Four. Patrols should have at least two people, as you are more vulnerable alone. Each patroller should be armed, but not so much as to draw unnecessary attention to yourself. For instance, in an urban environment where most people do not have semiautomatic rifles, a group of people armed with AR-15s would draw a lot of attention. Perhaps a handgun and a hidden fighting knife would fare better in that environment. Patrol casually while having enough situational awareness to gain information you can bring back to your group. Everyone should know the route and have meet-up locations.in case you are separated.

If people are living nearby, it would be prudent to assess their capabilities. It might or might not be smart to make contact with them. You will have to assess the situation and listen to your gut before making that decision. One thing I do have to mention is that this should be for security only, not to take from them. We are survivors, not predators, and not marauders. Do not take from their apparent weakness or launch a preemptive strike because you feel threatened by them. Leave them alone, and move on with your patrol. Assess their capabilities, and if you feel it would be mutually beneficial, establish contact with them.

Avenues of approach are a general path intruders would take to get into your home. Usually it is the most covered and concealed route. Identifying these avenues of approach early on allows you to plan for them and put special emphasis on securing the areas in and around them. Posting an extra sentry to cover the avenue of approach that is most dangerous to you is a potential solution; so is getting rid of all cover or concealment that makes that avenue of approach a viable option. Patrolling Area Four allows you to seize the initiative and deny intruders the opportunity to get the jump on you.

(To be continued tomorrow, in Part 2.)