Dead space is an area that cannot be covered by weapons or observation from your position. This is because of obstacles or the nature of the ground. Some examples are areas behind rubble, deep craters, holes, and heavily wooded areas. Dead space is particularly dangerous because it allows intruders to hide and attack you or your home from a place of relative security. Once people establish a position in dead space, it is very difficult to get them out. In your patrols, you should identify dead space and find a way to mitigate its risk to your home security. One solution I have found to be effective is posting sentries at different positions so they can see and fire on dead space as necessary. This allows you to prevent people sneaking in your property. Part of your home defense plan should include dead space and how to cover it so it cannot be effectively used by intruders.

Area Three consists of anywhere inside your property line, but not quite inside your home. In rural areas, I would recommend designating your property line as Area Three. This can be massive amounts of space, and it will require constant surveillance. In suburban areas, I would recommend your yard. In urban areas, this can get a little tricky. Depending on your circumstance, staircases, hallways, or anywhere closer to your apartment than the parking lot should be designated as Area Three. The key to Area Three is initiation of defensive action.

Sentries are crucial to successful defense in Area Three. They should have been watching Area Four and getting intelligence, and they become even more important when a potential intruder enters Area Three. They are responsible for identifying potential threats, warning the rest of the group, and engaging if necessary. I would recommend at least one static sentry positioned at a covered position of high ground, usually the roof top. Getting the high ground is important. Not only can you see more, you can stay behind cover while getting multiple opportunities to strike opponents who are darting between cover to get to your home. Then assign at least one roving sentry that, at inconsistent times, patrols Area Three, with a special emphasis on checking any dead space for potential intruders. 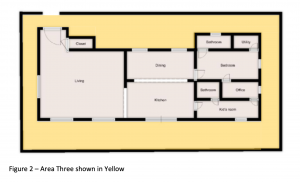 Plan so they will be able to have enough rest to stay awake during their sentry duties, as well as remain alert enough to complete the other, non-sentry tasks they already have. In general, medics should not be sentries so they will be alert enough to treat their patients. Obviously, sentries can only be posted at all hours if you are in a group. If you are alone, then you must assess the most high-risk times and be watchful at those times. Drones are so useful in urban environments, especially in apartments. You can set a drone to hover in the air and alert you of any movement. Then you can assess the threat while in the safety of your apartment. In essence, it allows you to be at multiple places at the same time.

Once intruders have entered your property line or have otherwise entered Area Three, you should initiate action. The action you take should be based on the intruders’ reasonable intent and capabilities. If a group is armed and trying to sneak past a fence, you should be more aggressive than you should be toward a lone, unarmed person wandering around. Your surveillance in Area Four should have given you enough time and information to make that judgement call.

The following can be used as initiation: light, sound, and violence. The entire point of Area Three is to initiate action that will remove a threat, based on the individual situation. You should escalate as necessary, usually starting with light or sound. Shooting someone first can lead to bad accidents, unnecessary deaths, and legal ramifications – even when SHTF. Disasters such as Hurricane Katrina showed that deaths would be remembered, and those who shot first and asked questions later had to face jail time when governance was restored.

Initiation by light allows you to identify an intruder’s movement, especially at night, as well as make it clear that you know exactly where he is. Many potential intruders would run away immediately. It also can temporarily blind or distract him, buying you time to act. While this works particularly well in the nighttime, it is still effective in the daytime. Arming sentries with bright spotlights allows them to initiate with light, which can also be a silent signal for the other members of the home to get ready for a potential attack.
Initiation by sound allows you to very loudly signal that an intruder is present. This may scare him into running away or make hasty movements. This can cause him to make mistakes, such as freezing out in the open, which you can exploit. This works well in both the day and the night. A siren or simply yelling when you see someone are very effective for this purpose.

Initiation of violence should only be taken after light and/or sound have been directed at the intruders. Yell out that they need to stop or they will get shot. Then, if you see intent and the capability to do you harm, you may open fire. The capability can be assessed by either a weapon or breaching equipment that is visible. Use an appropriate weapon for the enemy – do not use a fully automatic 7.62 weapon when a .223 semiautomatic rifle will do. It could be a probing attack to see what weapons and numbers you have. Then more attackers could come, prepared for the weapons and numbers of people in your defense. Therefore, hide the capabilities you have until you need them.

Once sentries initiate, the rest of the group should grab their weapons and go to their pre-designated fighting positions. Occupy the highest ground on the territory, and ensure that all dead space is able to be covered by one of the group members. The key is to mass the effects of your firepower to either make the attackers run away or kill them. In my apartment, with one door and two windows on the second floor, I can assess the situation from outside the windows and quickly initiate from one of two covered positions inside my apartment. I have the high ground and can cover any position from inside our apartment. If an intruder gets to the stairs, I can secure the stairs before he can reach them.

Obstacles should be integrated into your defense of Area Three. While no obstacle can stop a determined enemy, it can absolutely slow him down. Better yet, it can direct the attackers in a certain avenue of approach. By leaving one avenue of approach – which you choose – relatively clear, you can funnel them into a trap. This, combined with overwatch from dedicated sentries, can create a formidable defense before attackers even reach your home.

While this is effective, you may not be able to identify them or stop them in time. This is why it is important to protect all entrances into the home. Board up all the windows on the first floor and lock all doors, preventing intruders from breaking in. I recommend boarding up the windows as seen in this video: Boarding Windows. Plywood’s flexibility and strength causes it to resist breaks and damage from attackers. The 2×4 on the inside gives it extra strength, as well as making nails in the walls or window frames unnecessary. These can be made before SHTF and stored for use. With practice, all the windows and other forms of glass on the first floor can be boarded up in five minutes. Leaving any other floors open allows defenders to fire on intruders from places of relative security inside the home. If attackers get past your defenses in Area Three, they will either be stopped or slowed down by your barricaded windows and doors.

(To be concluded tomorrow, in Part 3.)