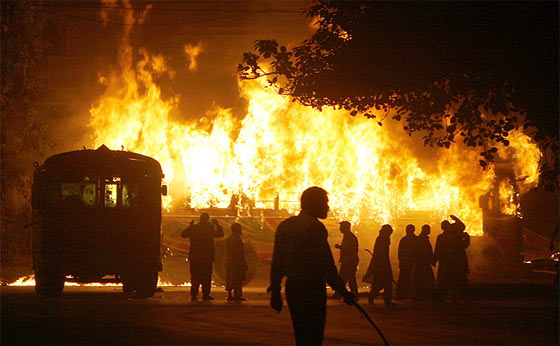 During the time period of a social societal collapse (or following a collapse), law and order as we once knew it will break down to varying extents – or completely. Some, most, or all of us may be living WROL (Without Rule Of Law), the extent of which may depend on where you live.

During this time of chaos, an individual will have rights only as long as he or she can defend them.

A devastating social collapse will smash your preconception of safety & security.

This is the subtle logic of violence: Your rights will only be those you can defend.

Most people may feel uncomfortable with this notion. However it’s something that you might inevitably face under collapse conditions. It’s best to understand this and prepare (personal and home security) as necessary.

Most people have never had to defend themselves or their property. It will be difficult to grasp, understand, or accept the logic of violence. Criminals on the other hand, understand it fully.

Presently we are living through a time of upheaval. A society that is quite visibly decaying into something less than orderly.

While criminals are generally held in check by the police and justice system, there are obvious changes taking place before our eyes. Parts of the country are essentially WROL already… thanks to far-leftists mayors and governors allowing it to happen.

It feels like we have been, and are being divided in irreconcilable ways that have become a danger to our societal fabric. There are organized and very well funded groups who are loudly proclaiming that they will be attacking us (physically) as they continue their attempted ‘take down’ of America as we once knew it. For those of you who’ve been following along, you know the groups whom I speak of (and those who are behind them – supporting them).

Following a major social collapse, the criminal element will be unleashed while the police become overwhelmed by the sheer magnitude of it all (or stand-down due to orders from the mayor or governor – which we’ve already seen happen). The Police will also be like the rest of us: concerned for their own security, their own families, their own homes and property… At some point they will stay home and defend their own.

Collapse will be worst in the cities (where martial law may be declared).

[ Read: What Would Happen If Martial Law Is Declared ]

The suburbs will see it too. Just not at first. Rural? Eventually no one will be unaffected under such a scenario.

Your Rights Will Only Be Those Which You Can Defend

If and until order is restored,
your rights will consist of those which you can personally defend.

Defending your rights under social collapse conditions may result in physical threats to your person, your home or your property. It may lead to engagement of force, violence, or any actions thereof. It’s not a pleasant thought for most people who are used to an orderly and relatively safe & secure society.

But when law enforcement is thinned or not present, a vacuum is created. And the criminally minded (and/or opportunists) will fill that vacuum.

Most people don’t have much, if any, experience with defending themselves against violence. Many or most people probably have not given serious thought to the circumstances of a major social collapse and the ensuing reality of having to defend one’s rights for real. Most people think it can’t happen…

The thing is, it has happened before, it is presently happening in some places around our own nation, and it may even happen in your neighborhood one day.

If you are reading this, then I hope you will at least think about it, and the things you might do to prepare for such a time. Don’t get stuck in normalcy bias. If you’ve thought it through, you will be less shocked and more prepared if and when it happens.