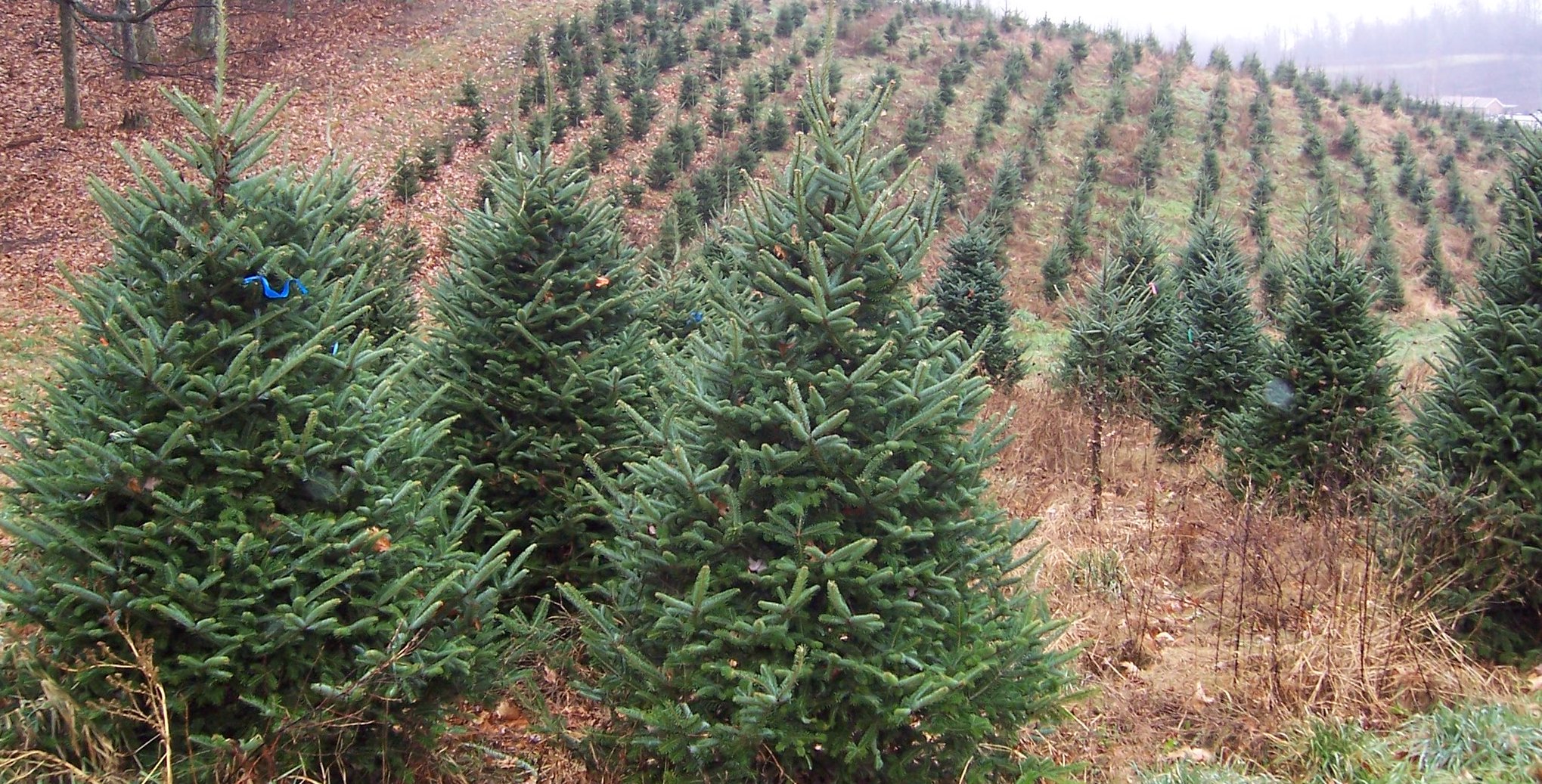 About 35 years ago while living in suburbia, my next-door neighbor suggested we buy a piece of land and grow Christmas trees. His line of reason went something like this. “We plant the trees and come back in 10 years and sell them all.” We didn’t pursue his idea.

Little did I imagine that a few decades later I would be doing exactly that. Well not exactly. In 2001 I bought a 31-acre farm in south/central Pennsylvania. That is rated climate zone 4. The arable land was leased out to two local farmers who grew corn, wheat and soy beans and I decided to keep the arrangement in place to help with the taxes.

There were a couple of acres though that were too steep to farm so I started to explore how I could put it to use. I contacted the county extension service and they came up with several suggestions such as an orchard, berry or flower growing or Christmas trees. Since I was still working full time and having an 80-mile round trip commute to my workplace, I opted for Christmas trees since it seemed to me be the least time-consuming.

My farm lane is long and narrow and not user friendly for large trucks which would be required for a wholesale operation so I elected to opt for the “choose and cut” option. I researched what species to plant, orientation, spacing, soil pH, etc. The hillside I planned to utilize faced south, not the optimum direction according to the information I found but I decided to give it a shot. I explained to my wife, “Even if we don’t sell any trees, we will have planted a forest.”

The recommended spacing for planting is five feet between trees and six feet between rows. If you are planning on wholesaling you will need to leave space at intervals to allow for loading the cut trees on trucks. This means you can plant approximately 1,455 trees on an acre of ground. Based upon the acreage available and the time and labor you can invest the size of the operation is up to you. The ability to size the operation to fit your space and time available is a great advantage. You may also find that you are able to accomplish the shearing and harvesting during times of the year when you would not normally be too busy with other chores.

In 2003 in order to see which varieties would do best, I ordered 600 three-year seedlings: one hundred each of Fraser Fir, Douglas Fir, Norway Spruce, Black Hills Spruce, Colorado Blue Spruce, and Scotch Pine. I would later add Concolor Firs. Costs ran about 50 cents per seedling including shipping. The dry root seedlings arrived in mid-April and my wife and I planted them using a digging bar. Things went well in April and May but we began to lose seedlings in June when the weather turned dry. Because of time constraints and the plantings being located uphill from a water source, irrigation was not an option. Perhaps survivability rates would have been higher if I had used an auger to create some loose soil around the seedling rather than compacting the soil with the digging bar. I would switch over to a gas power auger in later years.

Based on the results of my first year’s planting I decided to concentrate on Fraser and Douglas Firs due to their superior survivability rate versus the other species.

Over the next eight years I planted 500 seedlings per year. The first few years all I had to do was plant. As the trees began to grow, I had to go through the planting and snip off a stray shoot or two. Then the faster growing Scotch Pines needed shearing. This is done anytime after new growth is established usually by the end of June. Because of the high mortality rate, I never had more than a thousand trees to shear at one time, but it would still take a couple of weeks to complete the job. I used a gas-powered hedge trimmer, later switching to a battery-powered one. This was very labor-intensive having to rake up and dispose of the clippings. Mowing was also a chore particularly during wet seasons. Other problems started to occur. Despite still losing trees to drought at the top of the hill, I lost trees in low lying areas due to root rot. Pests like bagworms were a minor nuisance.

Then disaster struck. Just as my Douglas firs were getting to the marketable height of 5 to 6 feet, they became infested with a fungus known as Swiss Needle Cast. As the name implies it causes the needles of the tree to fall. A grower nearby, who had become my mentor sprayed the trees with a fungicide but I was not happy with the results. He informed me that the trees would have to be sprayed 4 to 5 times a year. After calculating the cost of the spray and the labor involved, I decided to cut down the trees and burn them. Potential loss: 300 trees at $40 each = $12,000. My accountant informed me that I could only claim the actual cost of the tree which was the original cost of 50 cents and any other cost associated with growing them. Since I was doing all the labor myself, any additional expenses were negligible. The most disappointing aspect of the whole affair was having to remove the trees I worked so hard to raise.

I had originally estimated that it would take around 6 to 8 years to grow the trees to a marketable height. Since I did not fertilize and was now relying on the slower-growing Fraser Firs, I had to stretch out my timeline. I did manage to sell some Scotch Pines, Douglas Firs and Colorado Blue Spruce to friends and family early on but it wasn’t until 3 years ago that I was able to sell to the general public. That’s 15 years! I believe my biggest mistake was planting 3- year seedlings instead of 5-year transplants. This might improve the mortality rate and shorten the time to marketability. On the other hand, they cost more and I would need to purchase some equipment to make a larger hole while planting to accommodate the larger roots.

The Scotch pines grew quickly and I was able to sell them within the first couple of years. Once they reached a certain height they become unshapely and difficult to prune. A good choice to grow while the slower growing trees mature.

The Norway spruce also grew fairly quickly and grow full and thick which customers like. On the other hand, the needles are stiff and a bit prickly. They tend to grow in a stout shape which needs heavy shearing.

The other spruces have the same characteristics as the Norway spruce.

The Douglas fir grow fairly quickly but unless your area is free of Swiss needle cast disease or you are willing to spray, I do not recommend planting them.

The Concolor firs grow relatively fast. They have a unique citrus smell and soft needles. A nice niche market.

One thing that worked out in my favor was selecting Fraser Firs. They are quite popular with the buying public and because they take longer to grow few people bother to plant them. The needles are soft yet the branches are strong enough to support ornaments.

So, was it worth it? If I tried to calculate my pay, I’m sure it would be in the cents per hour range. One thing that I forgot to take into account is that deer hunting season coincides with Christmas tree sales time. Did I mention that whitetail bucks love to rub their antlers on conifers? I do manage to go out and hunt early in the mornings for a couple of hours before I open up for business. Another nice facet of the operation is the fact that I can do other chores while waiting for customers to arrive. We are usually not too busy during the week and I use that time to do things like performing seasonal maintenance on my lawnmowers and other equipment. At 68 years of age I am pretty well done in by the end of the day.

One major benefit that I really didn’t consider when starting out is making contacts in the community. Folks like to comment on the quality of the trees, the deer rubs, hunting, the country setting and, yes, politics. I can sort out the like-minded folks from the herd.

The other day talking hunting with a repeat customer, he mentioned he could not find any .270 Winchester ammo for his hunting rifle. Since I stocked up years ago, I sold him 20 rounds at cost. Since it was the day before the season opener, he was certainly appreciative.

It fills my heart with joy to see the families come out and share the experience together: grandparents, mothers and fathers with their children, newlywed couples just starting out, older couples. Yeah, it’s worth it.