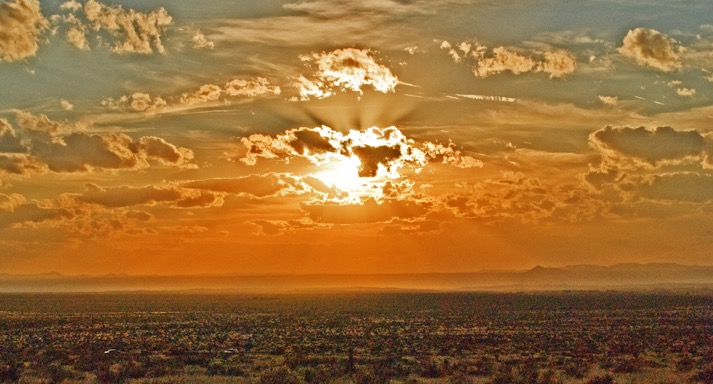 I recently moved from Southern California to New Mexico because I requested a transfer to my employer’s office out there. I lived most of my life in Southern California; please feel free to read my 2019 SurvivalBlog article about prepping there.

The road trip was long, but interesting. I drove through the beautiful desolation of the Mojave Desert on I-40. I saw vistas worthy of any Louis L’Amour novel. There weren’t many passenger vehicles like mine; most of the vehicles were trucks. After the Mojave, night fell and I was rolling through the Kaibab National Forest. I caught a glimpse of a man walking by himself on the shoulder of I-40. (Also seen on the way: a large billboard saying: “Navajos For Trump!”)
I stayed the night in a town in Arizona, and then went on to New Mexico.

My 22-year-old Toyota Camry performed beautifully. I’d had it serviced before the trip. There I was with the cruise control set for 80 miles per hour on level ground, engine at a constant 3,000 RPM, and the engine temperature was astonishingly low. This is not something you see in the speed up/slow down/crawl driving environment of Southern California. The old girl has over 180,000 miles on her, but I won’t trade her for anything. They’ll pry the steering wheel from my cold, dead hands! The road trip put about 800 miles on the car. I just recently learned that I can work from home most of the time. When I am needed, the commute will be only about 15 minutes – a lot less than my Southern California commute!

I couldn’t fit everything in my car, so I used a moving pod service. I won’t do that again. It’s annoying to be without a lot of my stuff for three weeks, especially my bicycle (EMP-proof transportation!), my kitchen equipment, most of my shoes, and various other prepping items such as my toolbox, my measuring tape, my household battery charger, and my rollable solar panels. Next time I’ll rent a moving van and drive it myself; the only disadvantage of that is that I would have to get my car separately, or tow it.

When I wrote my previous article, I was the caretaker of my parents’ home. I had a garden, a compost bin, rain barrels, a fireplace, a charcoal barbecue, and lots of storage space for prepping items. I had a sundeck for using my solar oven. I used the house fireplace for destroying sensitive documents and other combustible waste such as used napkins, and then after two days to be sure it was cool, I put the ash in my compost bin.

Having an apartment, even a nice one like mine, is a major downgrade of my ability to prep. I have a balcony, but it faces north, so I can’t use my solar oven unless I go to the courtyard swimming pool. (However, a north-facing apartment might mean less use of expensive electricity to cool the apartment during the summer.) Store-bought vegetables just aren’t the same as home-grown vegetables. I hate having to waste compostable items by throwing them in the trash. No charcoal barbecue or fireplace; I have to hope that the grid stays up so that I can cook. Another thing that troubles me is the powered parking lot gate. While this is in place to keep out unauthorized vehicles, I can’t help but wonder what I am supposed to do if I (or everybody) must evacuate the apartment complex during a power failure.

Clearly, an apartment is not ideal for prepping. Nevertheless, I want to make sure I like life here enough to want to buy a house; surely SurvivalBlog readers will agree that buying a house is not something to rush into. The other reason to have an apartment now is that I might have to move somewhere else to get a higher paycheck after I earn more IT certificates; it’s easier to leave an apartment than a house.

Still, I can do the basics: stockpile water and canned food, have some cash and precious metals, keep my car fueled and in good working order, and keep myself fit with exercise and nutritious food. The apartment has a nice outdoor exercise area with pull-up bars and benches for abdominal exercises. I can also do push-ups, sit-ups, squats, etc. No need for a gym! I can’t jog right now because of an ankle injury, but I can ride my bicycle again when my moving pod gets here. In addition to SurvivalBlog, I will follow Apartment Prepper more often. I will look for a community garden where I can grow some of my own vegetables. I might be able to grow a few items on my tiny balcony.

Winters in New Mexico are mostly sunny, dry, and chilly. I used to live within a few miles of the beach, so I’m not used to such dry air. I have to use eye drops frequently and step up my use of unscented lotion. (Yes, fellow men, you can get unscented lotion. This is what I use. Safflower oil or olive oil are helpful too. Skin is the body’s first line of defense; take care of it.) I also hold a damp cloth to my face and nose and inhale deeply to keep my nose from drying out. It helps, but I hope my body adjusts soon. On the bright side, I ordered a Lehman’s clothes drying rack to take advantage of the dry air. My clothes will last longer, and air drying won’t add to my electricity bill.

In Survival Retreats and Relocation, Jim Rawles and his son Jonathan Rawles described New Mexico as a Third World country within the borders of the United States. I haven’t gotten to know the entire state yet, but what I’ve seen where I live shows that JWR was correct. For example, there is a trailer park on the other side of my apartment’s perimeter wall. There are small homes in run-down condition near the industrial area through which I recently drove. There are homeless people roaming the streets, even in the comparatively ritzy downtown, but it’s not half as bad as Los Angeles, where there are said to be about 66,000 homeless – enough for about six Army divisions! (I’m sure that this is in large part because California winter is warmer than winter in most other states, including New Mexico.)

I felt safe walking the almost deserted streets of downtown here during the daytime; in Los Angeles, I would be on Red Alert. When I checked out the various small restaurants and cafes downtown during my lunch break last week, the employees told me that their businesses had suffered greatly. No surprise, of course; Governor Grisham of New Mexico has chosen to keep the mask mandate in place instead of following the wisdom of Governor Abbot of Texas and Governor Reeves of Mississippi, who recently ended the mask mandates and lockdowns in their states. Incidentally, Governor Lamont of Connecticut recently reduced his state’s lockdown. Yet he’s not being trashed by the media. Partisan bias? Naaah…

On the positive side, New Mexico has some crown jewels such as Kirtland Air Force Base, Los Alamos National Laboratory, White Sands Missile Range, and the up-and-coming Spaceport America, the world’s first purpose-built commercial spaceport. Now that commercial space activity is becoming more important, Spaceport America might be able to contribute a lot to New Mexico’s economy in the future. The only way to make New Mexico prosperous is the same answer for the U.S. and the world as a whole: governments have to end their lockdowns, get out of the way, and let people work. People also have to be willing to work and learn, and I think that many homeless choose to do neither. The lockdowns and stimulus payments are a boon to those who are not willing to work and learn. As Robert Heinlein said, there are Makers, Takers, and Fakers. The federal government, as well as many state and municipal governments, are catering to the Takers and Fakers.

No doubt some SurvivalBlog readers will ask why I did not move to the Redoubt. It was not for lack of trying; I inquired about transferring to the company office in Spokane, Washington, and I sent many applications to employers in Idaho, Montana, Wyoming, and Nevada. (In this government-created depression, I did not dare to move to the Redoubt without a job.) I had a few interviews, but no one wanted me. I ascribe this to a number of factors: my inexperience in my job field of IT (only 2.5 years), only one certificate, and possibly a reluctance by people in the Redoubt to hire a California escapee – they might think that I am out to “Californicate” the Redoubt. Some Californians might want to do that, but I’m not one of them. As to the other problems, all I can do is obtain some more certificates using the extra free time that working from home allows.

Furthermore, I have family in New Mexico whose help has been invaluable recently; I have no family or friends in the Redoubt. Perhaps not getting a job in the Redoubt at this time was a blessing in disguise.

I confess to some ambivalence about the move. It was expensive. I have to learn a new city, new laws, get a new driver’s license, get new health insurance, and learn a new social scene. I miss my friends and family back in California, and I miss the beach. Say what you want about California; there’s nothing like catching waves at the beach to chase away stress. However, I remain hopeful for this new chapter in my life. I like the lower gasoline prices and lower sales taxes. The roads are less congested. New Mexico’s gun laws are less restrictive for now, although some bills infringing on that freedom have been proposed. Rainwater collection is encouraged. Once I have more IT certificates, I will be earning more, even in this government-created depression. And though my apartment is rather expensive for the area, houses are definitely cheaper than Southern California. The dream of having a retreat of my own is still alive!

Next up, once I get fully established: some road trips to Roswell, Carlsbad, the Trinity Nuclear Test Site, and other interesting places. There are some small towns in JWR’s Survival Retreats and Relocation book which might be good places to move to for the long term. I will have to check them out. One of my graduate school friends has some properties in one of these small towns, so I’m going to arrange a tour with him in the future to see what it’s like there.

Oh yes, one more thing: find my other half so that I have someone to share the journey with. One of the things that came up for me on the trip through those wide-open, lonely spaces is that I haven’t devoted enough time to finding my other half. There isn’t much point in prepping, gear, or guns unless there’s someone to defend and care for.